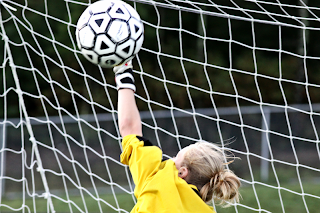 The Whitman Hanson girls soccer team won their third game in a row with a hard fought 3-0 win over Silver Lake. Devon Morse opened the scoring two minutes in to the match. Yazmin Civan and Cassie Chernicki also scored in the first half making it 3-0 at the half. Both teams battled through a scoreless second half. Lauren Clark made 3 saves in the Whitman Hanson net to earn the shutout. Alyssa Eaton, Nicole Galewski, Lily Higgins and Haley Bukow played strong defensive games in front of goalkeeper Lauren Clark.
Posted by Patriot League at 9:14 PM