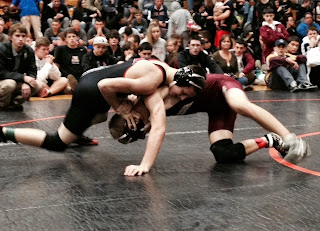 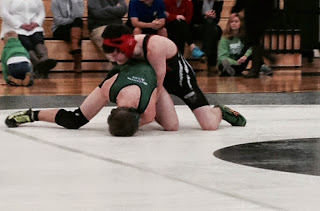 >
>
> The Whitman-Hanson Wrestling team improved to 4-1 Saturday on the young season. After defeating Duxbury on Wednesday night the Panthers took 3 out of 4 matches on Saturday in Marshfield. Also in Marshfield to compete were Chelmsford, Stoughton, Weymouth, and Tolgate, Rhode Island. W-H did not start out on the right foot early as they dropped the first of its four matches on the day to powerhouse Chelmsford 60-22. The scrappy Panthers pounced back though taking the next three from Weymouth 60-18, Marshfield 63-12 and Tolgate 53-14. Next up for Whitman-Hanson wrestling is a new adventure as the team heads south to Florida with Coach Broderick to compete in a holiday break wrestling tournamnent in Orlando. It has taken much planning and Coach Broderick hopes to make it an annual tradition of competition.
>
> Attachment 1: Kyle Tamulevich of W-H (black singlet)
> Attachment 2: Mike McDonough of W-H (black singlet)
>
Posted by Patriot League at 11:36 AM