Lauren played a left-handed player from Framingham and lost in two sets, 1-6 and 2-6.

The doubles team of Kylie Corr and Jess Green almost went to 3 sets, just coming up short in the tie-breaking 2nd set 5-7.

Attached is a picture of the four girls taken by one of the parents. Can you believe I went to an athletic event without my camera! 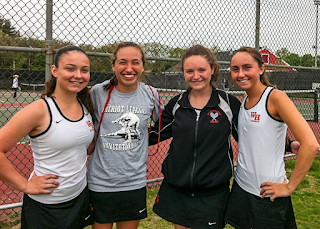