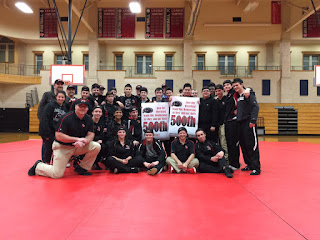 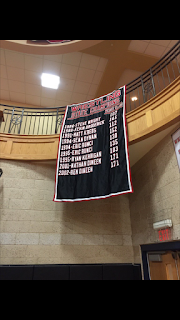 >
> Whitman-Hanson Panther Wresting wins number 500
>
> Wednesday December 14th is a night to remember for the WH Panther Wrestling team. Not only did they beat Quincy high school 34-32 in a very exciting match, they also achieved a milestone 500th victory in the process.
> But that wasn't all that happened tonight as the Panthers also unveiled a State Champions banner with four state champions in attendance. These included the first ever state champion for WH in Steve Wright, followed by Kevin Broderick, Nathan and Ben Dineen.
> Leading things off for the Panthers was Ben Cordingley with a pin in 4:06 in the 132 pound weight class. Joel McInnis followed with a tough 15-7 loss at 138 pounds. After several forfeits senior co-captain Jake Filicchia won a hard fought 13-4 victory over a quality Quincy wrestler winning by a score of 13-4. The match score at this point was WH 34 Quincy 22. Finishing things off for the Panthers was 120 pound freshmen Matt Rock. Matt fought extremely hard against a superior wrestler and loss his match by a 10-2 score enabling Whitman-Hanson to hold on for the final score of WH 34 Quincy 32. Coach "Rabbi" was extremely proud of all of his wrestlers tonight as they showed true grit and perseverance in every match. The Panthers are currently 2-2 on the young season and travel to Marshfield on Saturday for a Super Quad starting at 9:30am.
>
> Group picture of Whitman-Hanson Panthers after winning their 500 team victory Wednesday December 14, 2017.
>
> Gary "Rabbi" Rabinovitz
> WH Wrestling Head Coach
Posted by Patriot League at 10:19 PM