The Panther Varsity Wrestling team traveled to Marshfield on December 27-28 for the 32nd annual holiday tournament.  In total 38 teams participated this year and the Panthers finished 30th with a total of 35 team points.
Leading the way for the Panthers were co-captain Jake Filicicchia at 113 pounds finishing 7th and going 4-2 over the two day's.  John Will our other co-captain at 220 pounds also finished in 7th place.  John pulling out the last victory
by a slim score of 3-2 in triple overtime.  John finished the tournament with a 5-2 record.
On Thursday December 29th the Panther Junior Varsity team also traveled to Marshfield for some good competition.  Leading the way with two wins each were Steve Brooks at 145 pounds and Tyler Cullinan at 155 pounds.  Also earning victories on the day were Josh Baker, Damari Brandao and Christian Schneider.
Up next for the Panther wrestlers is a quad meet at Stoughton with Brockton and Southeastern Regional on Saturday December 31st.
Photo: L to R
Assistant coach Mark Snyder
John Will
Jake Filicicchia
Head Coach Gary Rabinovitz 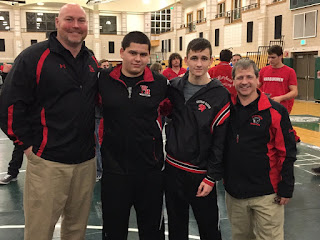 Posted by Patriot League at 8:25 PM