Before we recap the latest in WH Athletics, it’s important to recognize Ernie Sandland and the entire facilities department for their amazing work with the snowstorm.   The wrestling team looks forward each year to hosting the Panther Invitational which was scheduled for yesterday.  We obviously had to postpone due to the snow and the chances of holding the tournament today seemed slim.  If we couldn’t hold it this weekend, there is no spot later in the year we could reschedule.  However, Ernie told us, we will get it done and the school will be cleared.  The crews worked through the night and the high school was ready first thing this morning.  Because of that, the Panther Invitational went off as scheduled.  There are not many places where this could have happened.  We are so lucky to have such amazing people working on behalf of our students.

While on the subject of the Panther wrestling invitational, the teams did an outstanding job not only in the tournament but running the event as well.  From parents, to players, to coaches and even alumni – everyone pulls together to make this an incredible day.  It says a lot about the program when you see so many former wrestlers and their parents dedicate their afternoon to being a part of this great day.  Every member of the team does whatever is asked and because of it, Whitman-Hanson is able to run a first class event.  A special thanks to first year head coach Gary Rabinovitz and his assistant Mark Snyder for their attention to detail and their quest to make this something special.

Now to our update:

1)      On the mat at the Panther Invitational, senior captains Jake Filicicchia and John Will both took second place while Steve Osborne captured fourth in their respective weight classes.  Earlier in the week, the team beat a tough Silver Lake squad, 37-28.  The underclassmen really stepped up beginning with 120 pound freshmen Matt Rock with a pin in 3:33.  Next up was sophomore 138 pound Joel McInnis with a pin in 1:25 of the first period.  In the 160 pound class freshmen Tyler Cullinan won a very exciting match 9-5.  At the 170 pound weight class junior Steve Osborne worked over his opponent for a pin at 2:53 of the second period.  Rounding out the night with a hard fought victory in the 195 pound class was sophomore Christian Schneider defeating his Silver Lake opponent by a score of 13-5.  Others winners for the Panthers by forfeit were Steve Brooks at 145 and John Will at 220 pounds.  The Panthers improved their overall team record to 5 wins and 8 losses on the season.
2)      The gymnastics team won its first meet in more than 30 years.  We don’t really know the last time WH even had a team, but we are so proud of the girls and first year head coach Rachel Cohen.  Whitman-Hanson Gymnastics secured their first Patriot League win of the season (and first win since the program was restored after more than 30 years) over Scituate Friday night, scoring their best team score yet at 120.75 over Scituate's 115.3.
Sarah Bombardier placed 1st on vault with 8.65. Kaylee Torpey placed 3rd on vault with 8.45. Chloe Wilson placed 7th on vault with 8.1.
Sarah Bombardier placed 1st on bars with 7.4. Kaylee Torpey placed 4th on bars with 6.1.
Sarah Bombardier and Kaileigh Gordon shared 1st place on beam with 7.6. Joelle Puopolo had the 2nd highest beam score with 7.5. Kaylee Torpey posted the 4th highest beam score with 7.2.
Sarah Bombardier placed 1st on floor with 8.3. Kaileigh Gordon took 2nd place on floor with 8.2. Kaylee Torpey placed 3rd on floor with 8.0.  Joelle Puopolo had the 4th highest score on floor with 7.8.
Whitman-Hanson's Sarah Bombardier topped the all-around standings with a personal best of 31.95. Also with a personal best, Kayley Torpey was 2nd in all-around with a 29.75.
The Panthers also secured a non-league win over Carver on Friday night, 120.75 - 113.25
3)      The swim team had a nice win early in the week against Quincy, 100-80.  Sabrina O’Connor took third place in diving scoring 3 points for the team and getting her best score.  Madison Navicky was in a relay with Carissa Chane, Courtney Chane and Olivia Shaw taking first place at the start of the meet with an 8 point lead.
4)      The boys track team recorded a nice win Friday against Duxbury, 51-47.  Whitman-Hanson was led by double winners Lucas Muscoso 1000 and 2 Mile (10:17 State Qualifier) Jack Ryan Mile and 300 and Dan Cashman High Jump and Long jump. Riley Holland also had a big night qualifying for the states in the Shot Put.
5)      The Whitman-Hanson Girls Track & Field team (2-1) won decisively Friday evening in its win over Duxbury High 72 - 25.  The Panthers got out to an early lead behind Alex Santos who won the 55 Dash in 7.91 and Dorothy DiMascio-Donohue who placed first in the 55 Hurdles in 9.95.  Carli Alexopoulos also scored in both events.  Santos also won the Long Jump with a distance of 15' 10.5".   Olivia Morse took first in the 600 in 1:44.75.  Julia Cosgrave won the 2 Mile in 12:54.  And it was Nicole Norve taking the 1000 Meter run in a league best time of 3:11.20 to seal the victory.  Other impressive performances by Victoria Carleton (Mile, 6:16) and Olivia Reed (High Jump, 4' 7") capped off a nice win for Whitman-Hanson.
6)      The boys hockey team continues to show great improvement.  They lost a heartbreaker Wednesday 2 to 1 against Plymouth North.  Goalie David Perry was incredible making 45 saves.  Korey Howard scored the lone Panther goal.  The team’s game on Saturday was postponed and will be made up in February.
7)      The girls hockey team also had their game against Scituate on Saturday postponed.  That game will be made up on Friday February 24th at 12:40pm.  The girls team is having a great year but they lost to a tough Hingham team Wednesday night, 5-2.  Mel McAleer and Alyssa Murphy had a goal and an assist each.
8)      The girls basketball team took one of the top teams in the state, Hanover, to overtime on Tuesday night before coming up just short.  It was obvious how much the team has improved so it was no surprise on Friday night when the team beat Plymouth North on the road, 49-27.  Erin Leahy led the Panthers with 12 points and 7 rebounds. Sr Captains Sarah Saccardo and Taylor McVeigh had 10 points apiece.
9)      The boys basketball team returned from their annual trip to Florida after stunning the top seed in the Haines City Holiday Classic.  The Panthers were competing against 9A schools, Florida’s largest classification, but the team wasn’t intimidated and made it all the way to the championship game before coming up just short of winning the title.  The team returned to play in Massachusetts Friday night and Senior captains Luke Tamulevich (27 points) and Nikko Raftes (24 points) led the Panthers (5-2, 3-1) to a 69-61 win over Plymouth North. 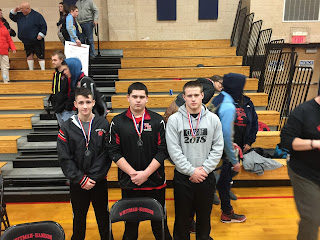 Jake Filicicchia, John Will and Steve Osborne
Posted by Patriot League at 6:56 PM