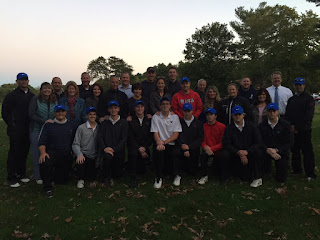 The Whitman Hanson golf team clinched a berth today to the state tournament qualifying round with their win over the Quincy Presidents 242-277. The Team is 9-8 on the season with one match remaining.

Tonight was extra special for the team, as it was senior night. With nine seniors on the team, eight took the course with something to prove: not only could they punch the team's ticket to the post season, but they were also playing in honor of fellow senior Ryan Sawtelle's mother, who tragically lost her battle with colon cancer last spring. Every member on the team wore blue bracelets and hats with her initials "LSS" embroidered on the back.

Each senior came off the 9th green to an ovation by teammates, coaches, and parents. The first group was Anthony Palmacci and Nick Duffy. Anthony shot the day's low with a 1 over par, 35, which got the Panthers off to a great start. The next group consisted of captain JP Drier and Matt Stanish, who both played extremely well; JP carded a 3 over par, while Stanish turned in an impressive 2 over par. Tommy Bombardier and Ryan Sawtelle made up the third group and Aidan Cotter and David Murphy were in the fourth pairing. Unfortunately, due to an injury, Cam Carpenter, who was the ninth senior, was ineligible for today's match.

A special thanks goes out to all the parents of both seniors and underclassmen for helping to make this such a memorable night. The team is hoping to keep their two match win streak alive once more as they host Hanover on Monday for their final match of the season.[image1.jpeg]
>
> __
Posted by Patriot League at 9:09 PM