Whitman-Hanson Panther gymnasts picked up another Patriot League win with their highest team score (128.0) over the Scituate Sailor's (116.4).

Junior Joelle Puopolo posted season high scores on uneven bars (7.1) and floor exercise (8.0), which were both Whitman-Hanson's third highest scores.
Freshmen Brooke Astuto (8.0) and Madison Scaccia (8.0) put up season high vault scores to start the meet.
The team struggled on their last event of the day, balance beam. However, Junior Erin McCoy, mainstay in the lead off position, strongly started the event off with her third stuck beam routine of the season. 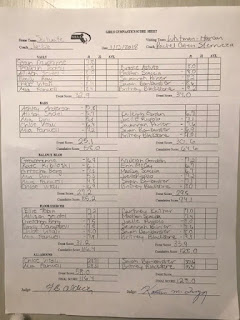 Posted by Patriot League at 9:24 AM