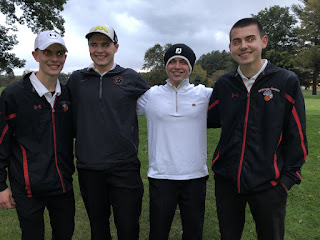 Their record is now 6-9 with their final match tomorrow at Hingham.

Today was also senior night for the Panthers. The four seniors, captain Owen Manning, captain Ed Scriven, Pat Dever, and Griffin Pulkinen were celebrated and cheered on as they walked off the 9th green for the final time as a member of the school squad. Big shoutout to the parents and families for coming out and supporting them on their special day. Also, thank you to Sue Moss who came to capture the memorable day with pictures that can later be found on the school athletic page.

Even though the team is now out of contention for the state tournament, captain Owen will be representing the team on Tuesday at Easton Country Club - he was great again in his play today with a 3 over 37.
Posted by Patriot League at 7:20 PM