Whitman Hanson Regional High School announced today the hiring of Zachary Botelho as the school’s new head football coach.  Botelho, who is a special education teacher at Middleboro High School, has served as the offensive coordinator for Old Colony High School while also working with the defensive line and outside linebackers.  Before joining Old Colony, he was the JV coach at Ashland high school while also coaching the offensive and defensive line for the varsity.

Botelho has served on the staff of three league championship teams and was part of two separate coaching staffs that each snapped 20 plus year playoff droughts.  In 2019, he coached a pair of 1000 yard rushers and has helped many players go on to play football in college.

“Coach Botelho checked all of the boxes in what we look for in coaches,” Whitman Hanson Athletic Director Bob Rodgers said.  “His focus is on teaching the game while keeping the priority the growth of the students as people.  The entire hiring committee was impressed with his vision for the program and his ability to use multiple teaching styles to tailor his coaching to the diverse population of a football team.”

Botelho, who holds a Bachelor’s degree from Framingham State and a Master’s Degree from Bridgewater State University, has coached baseball and wrestling at the high school level as well.  “I could not be more excited to be the next Head Football Coach at Whitman-Hanson Regional High School,” Botelho said.  “It is clear that this is a community that values athletics and is truly invested in their students. I look forward to becoming a part of this outstanding community and working to create a championship culture within the football program. I cannot wait to meet the student-athletes and get to work."

Botelho replaced Mike Driscoll who retired at the end of this past season after 10 years at the helm.  The Panthers compete in the Keenan Division of the Patriot League and will open the season at Hanover on September 10th.

“While I was impressed with Zack’s football coaching background and knowledge, what means the most to me as principal is his focus on integrity and character as well as the belief that all students can contribute in some fashion,” Whitman Hanson Principal Dr. Christopher Jones said.  “Zack’s special education teaching background will help him teach the game in a way that all students will be able to learn.”

Coach Botelho resides in Middleboro with his wife Katelyn and  his one year old daughter Norah. 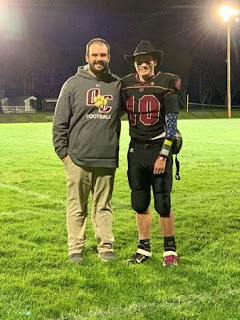 When writing or responding, please remember that the Secretary of the Commonwealth of Massachusetts has determined that email is a public record.

This communication may contain privileged or other confidential information. If you are not the intended recipient, or believe that you have received this communication in error, please do not print, copy, retransmit, disseminate, or otherwise use the information. Also, please indicate to the sender that you have received this email in error, and delete the copy you received.

Posted by Patriot League at 2:09 PM