There are so many things that make Whitman Hanson such a wonderful community but at the very heart of it all are the people who make up the Panther family, especially our students.  Our Superfans come up with weekly themes to help encourage school

Spirit and this week they wanted to do more than just that.  They decided to make our theme GOLD in honor of pediatric cancer awareness month.  That is why we had a Gold Rush of students at the football game Friday.  In addition, we raised more than $700 as part of our ongoing project to help families who have children at Dana Farber at Christmas time.

And now to our weekly rundown -

Our volleyball team lost 2 of three this week but they had an exciting home win over Hanover and a very close one against league power Hingham on the road.  In the Hanover win the Panthers won 3-2 (25-23, 18-25, 25-13, 24-26, 15-7) in their league match. Senior Captain Lily Welch was a force at the next with 18 kills, 8 solo blocks, and 2 assisted blocks. Fellow Senior Captain Abby Martin tallied 9 kills and 7 solo blocks. Freshman Caroline Gray tallied 42 assists, 4 solo blocks, 3 assisted blocks, 4 kills, and 2 aces. Senior Captain Meg Stone leg the team in aces with 3.

Our football team dropped their non-league contest to Rockland Friday.  The Panthers were led by junior quarterback Cam Burrows on offense. Burrows threw for 121 yards on 16 attempts, completing 8 passes including two downfield strikes to senior Collin Briggs. The Panther defense had several strong defensive stands and were led by senior linebacker Jake Guiliani who had 7 tackles, including one for a loss. Senior defensive end Malcolm Alcorn-Crowder also contributed with 6 tackles and a sack. The Panthers open up their Patriot League schedule Friday at home against Hingham.  Injuries have been a major problem and the team is hoping to get healthy for this important stretch.

It was a mixed bag for girls soccer this week going 1-1-1.  The highlight of the week was a 2-2 draw with Hingham in a battle between two of the top teams in the state.  Whitman Hanson opened the scoring 7 minutes into the game when Olivia Borgen fired home a Lauryn Fostello pass. After Hingham tied the game Borgen put the Panthers ahead 2-1 on a penalty shot and the score remained until the half. Whitman Hanson Freshman goalkeeper Ava Patete(13 saves), who was outstanding all night, kept Hingham at bay until they picked up a loose ball and fired it into the net with 4 minutes remaining. Nora Manning and Kayla Cassidy were outstanding for the Panthers along with the defensive efforts of Megan Bizier, Skylar Jordan, Emily Leitch, Savannah Kamperides and Makenna Marshall.

The boys soccer team had a rough week going 0-3 but there were some highlights.  Senior captain Jayden Stafford scored both goals in a 3-2 loss at North Quincy and he also assisted on Manny Osorio's goal at Silver Lake.  Ethan Smith has played well in net making 65 saves this season with help from senior captains Sean McAlpine and Jacob Donovan.

The golf team won 2 of three this week the highlight of which was a 275-289 off the back at Ridder Farm Golf Course.

The Panthers (and match) were once again led by senior captain Pat McBroom with an impressive 3 over par, 39. Junior Harry Chase bounced back from a tough performance yesterday to card an 8 over 44 to help push the Panthers to victory. Seniors Cam Murray and Jack Carron also contributed to the win, shooting a 46 and 47, respectively.

The highlight of the week for the field hockey team was a 3-3 tie at West Bridgewater.  The Panthers went up 1-0 in the first quarter with a goal from Senior Captain Olivia Phelps.  The Wild Cats were able to net 2 goals in the second before the half to take the lead.  The Wild Cats scored in the third to take a comfortable 3-1 lead.  The Panthers dominated the third period offensively and Senior forward Ally Ayers scored her first of the season.  Ally Ayers tied the game up in the fourth with a second goal.  Both teams continued to attack each other offensively for the remainder of the game.

This is the week ahead 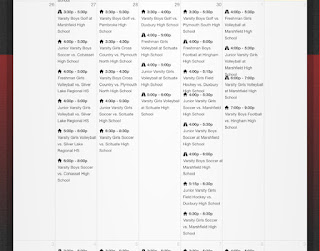 Sent from my iPhone
Posted by Patriot League at 4:24 PM