As many of you know, we are experiencing a terrible bus driver shortage which is affecting Athletics.  The result will lead to game time changes and in some cases cancellations.  Please be sure to follow us on Twitter @whatheltics for updates.  In some cases the changes may happen the day of an event.  Coaches should have sent home a transportation waiver which will give students the option to drive on their own or with others to select events.  Please do not sign this waiver if you are uncomfortable with this .

Now to our update: 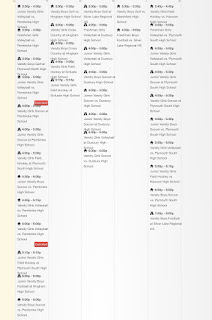 Sent from my iPhone
Posted by Patriot League at 3:04 PM